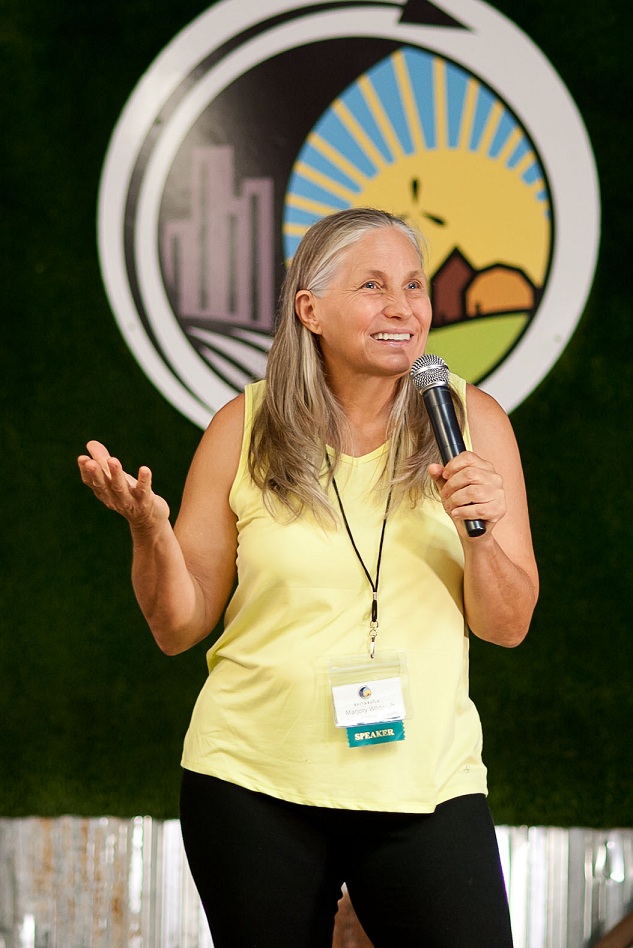 As we advance in technology and become the greatest at everything, there is one casualty that no one is talking about: our planet. Many businesses are designed in such a way that they are harmful to the environment. The biggest polluter and destroyer of Earth is commercial agriculture.

Marjory was a homeschooling mom. As a part of her kid’s education, they would often watch nature shows together. “I started noticing that after each show, I got depressed,” Marjory says. “And I realized it was because at the end of each show, they would talk about how the wild animals’ habitats were being destroyed by humans mostly for agriculture”. It was one day out in her garden that Marjory realized the solution was right there in her backyard. The more that people helped out by growing their own food, the less stress there would be on planetary resources.

Marjory began to teach classes on how to grow food locally in her community. But the workshops soldout so quickly and were so wildly popular she knew she had to expand and create a bigger organization.

Wildcraft founded The Grow Network, which is now the world’s biggest online network of people who are becoming more self-reliant. “Most of our members grow food because they know how harmful commercial agriculture is and they want to do something about it” says Marjory.

But creating a massive movement with almost 608,213 followers also brought a lot of life lessons to Marjory.”Builidng a purpose and mission-driven company means you don’t focus on profit, but you still have to pay your team and all the bills, so there is a lot of stress” says Marjory.

She wished she had learned the following things before starting her company with the purpose of saving the Earth:

By all definitions, Marjory Wildcraft and The Grow Network is a huge success. “I’m glad I’ve had all these years and experiences” Marjory says “It has made me a much better person”. And now that the world may be facing a huge food crisis Marjory is delighted to have built a platform of products and services capable of helping on a massive scale.

Marjory Wildcraft Is A Leader Who Walks The Talk

A fun fact about Marjory is that not only is she the founder and driving force of The Grow Network, but she also still grows her own food. “You just can’t beat the tastes and nutrition in homegrown food,” said Marjory. And Marjory is still teaching. She offers a free webinar,”How To Grow Lots Of Food In Your Backyard Even If You Have No Experience, Are Older, or Out of Shape”. Not surprisingly, people have been flocking to the webinar in droves. Marjory teaches the quickest, easiest, and funniest ways of growing calories and nutrients, particularly during times of crisis and/or grid-down. Her instructions are incredibly simple since she assumes you know nothing and are under time constraints to start caring for yourself. Marjory Wildcraft is also the author of the book “The Grow System: The Essential Guide to Modern Self-Sufficient Living—From Growing Food to Making Medicine,” which has been getting rave reviews on Amazon. You can reach Marjory (and yes, she loves to engage with her community in the forums) by signing up for her free webinar at http://www.backyardfoodproduction.com/

Tony Mantor releases New Hope-anthem, “Why Not Me”