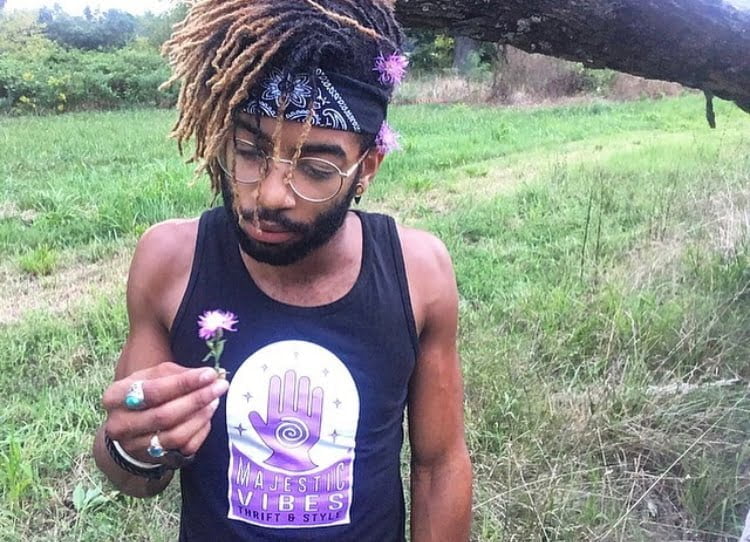 Alex Harvell gets to tell his story about becoming a positive and spiritual individual, who has branded himself around his lifestyle

majestic vibes is really just a reflection of my life and style! I was pretty much raised by my grandparents so When I was coming up, they had a lot of records that inspired me & the idea majestic.

I was blessed to be around different music such as Motown soul, funk, rock, and blues!

It was amazing to see the different colors & style of clothing that each Artist would wear along with hearing the sounds they were composing as well! Artist like Jimi Hendrix and Bands like funkadelic both really helped me expand my mind and influence the ideas behind the Shop as well.

Another thing that inspired the shop was skateboarding & seeing how skaters were starting they’re own brands and living a different lifestyle then the “Normal Path” taken.

So by the time I was in high school, I was already integrated into the lifestyle I wanted and ended up leaving school & starting the process of a Entrepreneur & Voodoo child as Jimi would say.

In 2014 I started a foundation called Freebyrunning (@fbr.fxbg ) which is a Art & Mindfulness Platform for Youth & Young Adults in the Fredericksburg Area.
I started coordinating shows, performing and bringing together local vendors to show they’re work.

A lot of inspired came from Art shows I had & it was there for the first time I got to bring out & introduce Majestic Vibes to the world by vending at a Show I had called “The Awakening”.

I got to share some jewelry I made and other miscellaneous pieces I had. It was about putting my expression out there in a little place I knew was safe!

The other side of majestic is just life. The shop is inspired from my family + friends love & support.

My grandparents who taught me it’s not the color of one’s skin but the character of the individual that matters.

The individuality of my friends and Artist I’ve been blessed to meet and spend time with through the years.

Since starting the brand, I’ve come out with T’shirts & Tanks! & my inventory as expanded by A lot!! I’m proud of myself and I know more then ever that It’s bigger then myself! This year I plan on taking things to the next level with new merch , music, vlogs, giveaways & more!!

We got a live show series called “The Majestic Sound Experience” which is a art & music festival that is happening this year with the Foundation @fbr.Fxbg & we will be having a series of Pop Up Shops with Tour Attached as well !

Lastly we have the grand opening of Majestic Strainz
While us a new chapter of the shop that promotes healthy living & the benefits on marijuana + other herbs that help fight off cancer & other sicknesses.

A lot on the way this year & I’m just blessed to spread love & not give up on my passion !

Founder / CEO (Based in Fredericksburg,VA)

Check out my recent story here

J Traxx: Is a Powerful and Underestimated Music Mogul Who is Making Musicians Famous Overnight