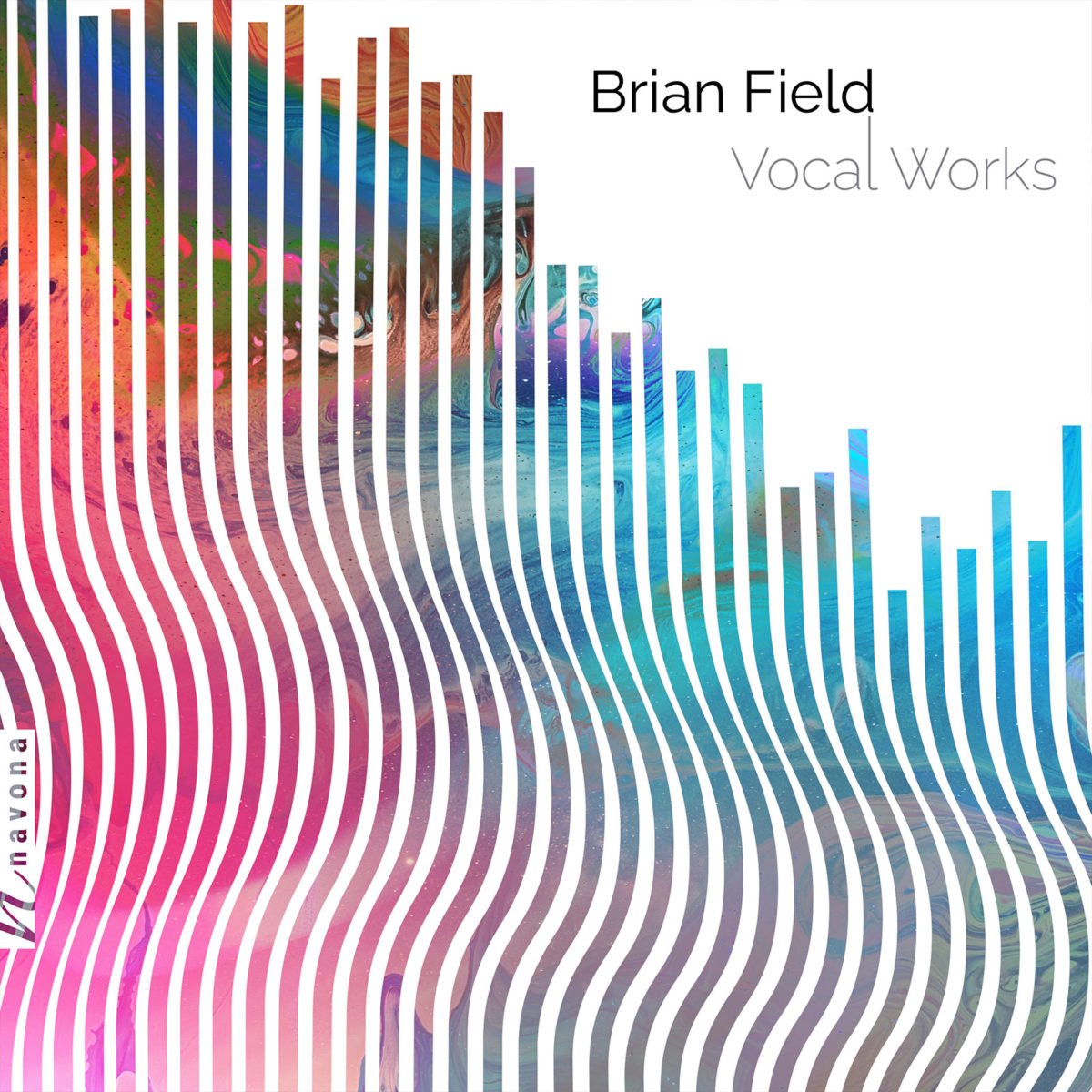 ‘Vocal Works’ is a compilation of pieces by American composer Brian Field on which the human voice is the main protagonist. With a long list of performers, the album contains a broad spectrum of works and instrumentation. Amongst the six pieces that make up the album, we can find dramatic song cycles with orchestral accompaniment, intimate a capella choral music, arrangements of traditional melodies, Broadway-inspired songs, and even a song cycle with piano.

‘By and by’ is the first number of the album, performed by The Budapest Chorus with Martón Tóth. It is a piece for a capella choir based on a hymn by Charles Albert Tindley. The singers are able to deliver a refined and modern take on the classical gospel sound. The conductor’s role in the preparation of the work can be especially seen in the choir’s extraordinary interpretational labor regarding the veiled timbre of the vocal emission, which greatly differs from that of a traditional European art-music choir.

The second work of the album—‘Tres canciones de amor’ (Three love songs)— is a song cycle for tenor and orchestra consisting of of three pieces named, Plena mujer, manzana carnal (Full woman, flesh-apple), Tengo hambre de tu boca (I crave your mouth), and Cuando yo muera (When I die). These are three poems stemming from Pablo Neruda’s poetic anthology ‘Cien sonetos de amor’ (one hundred love sonnets). Brian Field’s setting of these works reveals a side of his compositional aesthetic which, different from the album’s opening track, delves into the depths of post-romanticism. The three poems make up a cohesive whole through which a logical dramatic web is created.

Péter Illényi and The Hungarian Symphony Orchestra deliver a breathtaking reading of the cycle in which Field’s extraordinary orchestration shines through as an intrinsic part of the musical drama. Perhaps this performance more than any other on the record demonstrates the importance of a conductor attentive to detail and a responsive ensemble that is able to both technically and musically deliver accordingly. Recordings of new works or pieces which don’t belong to the standard repertoire rarely achieve such high-quality standards regarding ensemble tightness and subtlety. In this work, the orchestra has a protagonist role and is, as much as the singer, responsible for the turning of the dramatic wheels.

Regarding the tenor soloist Yanis Benabdallah, his command of the Spanish language is quite impressive for a non-native speaker and his delivery of the musical text engages the listener with Neruda’s text’s emotional and psychological depth.

Each of the three songs is unique and has its own characteristic features. The first one, Plena mujer, manzana carnal is the most expressionistic of the three with a broad dynamic range and generalized employment of dissonance. The second song, Tengo hambre de tu boca has a strong vocal presence in a declamatory style with few orchestral interventions. Finally, the closing song is the most blatantly operatic with fleeting references to Wagner, Strauss, and even Puccini. It is a highly lyrical piece that places Yanis Benabdallah in the spotlight and he delivers an extraordinary performance filled with passion and delicacy.

After the almost Wagnerian emotional climax of Neruda’s Cuando yo muera, the next track, Let’s Build a Wall! (An American Satire) with both the lyrics and the music composed by Brian Field, represents another stark stylistic contrast which at this point can already be seen as the norm. This piece is composed of tenor and a chamber ensemble. The subject matter is one of American president Donald Trump’s main campaign items for the 2016 presidential election, the construction of a wall between Mexico and the US as a response to the raging immigration crisis.

The orchestration once again demonstrates Field’s ability to masterfully adopt the stylistic properties which the piece at hand requires while still maintaining his own personal signature.

The album continues with an original arrangement for Soprano soloist and orchestra, of the traditional Sephardic lullaby Durme, Durme, Kerido Ijiko. Following the satire of let’s build a wall and the expressionist darkness of the Neruda songs, this arrangement comes as a much-needed emotional balm. The orchestra’s performance is filled with color and subtlety giving a light backdrop for Orsi Sapszon’s beautiful and heartfelt delivery.

The following track, Let the Light Shine on Me, returns us back to the intimate setting of the acapella choir with vocal solos in a similar gospel style to that of the opening piece. The Budapest Chorus delivers an even finer performance than on By and by with a warm vocal color and extraordinary dynamic range. The soloists’ performances are all-around stylistically on-point and contain beautiful flashes of the vocal display.

Before talking about the final work, it is important to make a comment regarding the album’s superb production quality, particularly regarding mixing. It is extremely difficult for albums with such a broad spectrum of instrumentations to sound cohesive and balanced but this one really hits the nail on it showcasing great clarity and every part shining through as it would in a live setting.

The final work in the album is Chimneys, sonnets-realities. This is an intimate song cycle for baritone with a piano accompaniment with texts from the E.E. Cummings’ collection Tulips and Chimneys. These are The Cambridge ladies who live in furnished souls; goodby Betty, don’t remember me; ladies and gentlemen, this little girl; when you rang, at Dick Mid’s Place; “kitty”. sixteen, 5’1”, white, prostitute; and when thou hast taken thy last applause. E.E. Cummings bleak poetry is set in a through-composed manner with every verse getting an original treatment revealing the poet’s original train of thought.

As opposed to the other tracks on the album, this work was recorded live, giving it an extra dose of interest to the listening experience.

Musically speaking, this is Field’s most daring and modern work of the record. With a generally expressionistic language that reminds us of some twentieth-century song cycles like Arnold Schoenberg’s influential Pierrot Lunaire. However, perhaps the most noteworthy element of the cycle is not its rooting in preexistent models but actually its originality especially in terms of how each song (and poem) maintains the logical flow of the cycle while bringing in new elements.

The highlight of this performance is undoubtedly the extraordinary vocal work of Edward Whalen. Once again, in a manner similar to Pierrot Lunaire, Field has the singer constantly change the type of vocal delivery passing through powerful lyrical passages to short, rhythmically vigorous declamation and even an almost spoken delivery similar to Pierrot Lunaire’s sprechstimme technique.

Another noteworthy aspect of this work’s performance is pianist Veronica Tomanek’s masterful collaborative skills always leaving room for Whalen to shine through while at the same time delivering a strongly rooted and confident performance with great vigor and control.

Field’s setting of the words is extraordinary in the sense that it is able to deal with extremely characteristic poetry in a respectful way while at the same time enhancing its features.

All in all, this album succeeds both musically and production-wise with great performances and an all-around great sound. Another feature that makes it unique and indispensable addition to any record library is the extreme stylistic heterogeneity that Field demonstrates across his works, a feature which also makes it a wonderful introduction to the composer’s sound world.

Performers (in order of appearance): The Budapest Chorus – Martón Tóth (Tracks 1 and 7)

Luciana Arroyo is an orchestral conductor and educator based in Buenos Aires, Argentina.