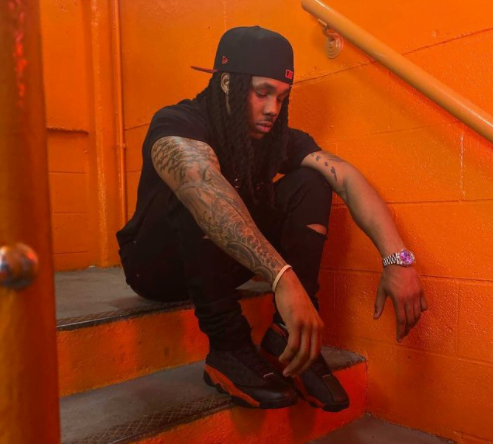 CT Finesse is a Recording Artist from St. Louis who has a deep passion for music which is one of the major factors that inspired him to build and pursue his musical career. Growing up he was influenced at a young age by family that were also pursuing there music and Artists he would listen to during his childhood. He was a football player in high school, but he had to quit because of other life experiences he was going threw, while overcoming those challenges and obstacles he was faced with he also wanted to focus more on his music and create bigger and better opportunities for his artistry.

Kevin Gates was an inspiration to him, and the first single CT Finesse learned from him was “4legs and a Buscuit,” from his album ‘Stranger Than Fiction.’ CT Finesse was inspired by Kevin’s ability to imagine what he said, which led him to listen to some of his earlier work and become a fan. The way Kevin approaches a rhythm while remaining comfortable is what he tried to incorporate into his music.

His music is inspired by facts and events that many people have seen, experienced, or been through throughout their lives. It’s also his narrative.

Since he has a calm mind when driving, he receives most of my inspiration. He’ll listen to a rhythm a thousand times before he can make an album out of it, or he’ll sit in the car and do the same thing even though he’s not driving.

From a professional standpoint, he is receptive to working with many individuals, but his personal favorites are Kevin Gates, Lil baby, Rylo, and moneybagg. CT Finesse claims that he would not turn down a fantastic chance from a major artist, but it would be Lil baby if he had to pick one.

He believes that you should still be yourself, that you should not try to fabricate your identity, that your hardships are the core of your life, and that only you will share your tale. What distinguishes you as an individual is your personal story.

According to him, the internet is the most valuable resource for the music industry because it allows you to view, hear, and follow musicians as they grow. It’s also a more effective way to contact musicians on labels.

At the moment, his latest single, “Only Fans,” is generating a lot of interest and enthusiasm. After releasing his single online his social media presents elevated and made a big impact on the Stl Music scene. CT Finesse has performed at a few big shows in St. Louis for artist like Kodak Black etc. now he’s looking to travel and touring doing shows on a national level. The song is catchy, and CT Finesse believes it has a universal vibe that both women and men will enjoy. CT Finesse’s new single, “Only Fans,” is out now.

For the past two months, @streetz1051 has been playing his single on their radio station. Since this new single is uptempo, energetic, and addictive, it will make you want to dance and have a good time. This latest single also earned him a spot on the #TheMIXX show hosted by National Recording Artist Kizz Q and Dj Flightt. The most crucial point is that both of # TheMIXX’s sponsors loved his music and advertised it on their platforms, like @thehypemagazinenetwork @yahoonews and @soeclothingbrand. He’ll also be appearing at The Hype Magazine and Yahoo News’ upcoming #TheMIXX show this summer. He also has another single “Enough” that made its debut appearance on the latest episode of “TheMIXX” and is planning to release his first EP in the summer 2021.

The most significant piece of advice he ever received was to still listen and deliberate before speaking. It’s quick to find out whether someone is deceptive when you hear. It’s even easier to interpret body expressions to avoid those situations from occurring before they do when you listen. Be on the look out for “CT Finesse” his is a talented versatile Recording Artist and is on the rise.