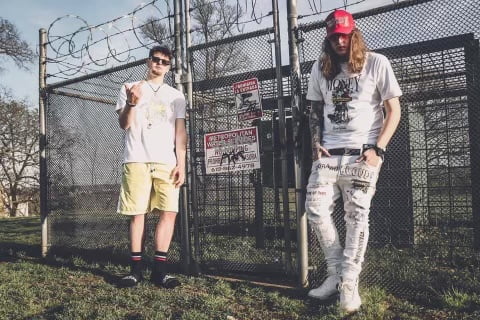 Kris Flair & Kris Moody, known collectively as Kris & Kris are both American rappers, singers, and songwriters born in Dayton, Ohio. Flair began pursuing music at the age of 14, creating the stage name Sonny. At 17, he began performing & by 18, he was already touring all over the east coast. In 2018, he tried to drop music & ran into issues with the name, however change was exactly he needed. He ended up changing his name to Kris Flair. The name is in honor of his cousin Kristin Magill who passed in 2013, while the last name was to represent the flashy style he has similar to Ric Flair.
At age 17, Kris Moody began powerlifting & by 20 he was going to the Worlds in Nevada. In 2017, it came to a halt due to a injury that caused him no to be able to compete. Moody had to find the next step in his career & life. Around that time Flair was doing shows in Ohio & invited him. After the show his mind was set, that music was it for him. The next day he bought music equipment & began learning how to produce and engineer.
In 2018 they started to record & immediately knew they had something special. They began working on music and releasing a variety of songs. In 2019 Kris & Kris released their debut song “Summer of 79”. Over the span of a couple months the song had over 100K streams across all platforms. That same year they embarked on a nationwide tour that catapulted them to the next level. As of early 2021 they are in the studio & back to dropping music consistently. Their new single “Denim” out now on all platforms is getting a lot of great feedback as its filled with a very motivating sound. I connected with both of them to ask them a few questions on their new single.

What inspired you to write this project?

The inspiration for this record came from our experiences we’ve had in the industry thus far. Seeing firsthand how brutal and deceptive of a business it is; filled with have nots trying to make a come up off someone else’s talent everybody wants something the song says ‘Get your hands out my Denim”.

Describe who would be able to relate to this track?

This track is for anyone who has passion for music & uses music as an outlet for their day to day problems. We have been through a lot over the past few years, but music has always been our escape from it all. Getting someone else inspired to hit the gym or enjoy a simple car ride Just to change 3 minutes of their day is a powerful thing. Covid has had a terrible impact on a lot of people. Releasing music we feel is our way to change some of that.

What are some ways you guys have been using to transform your sound?

Fell back in love with making it & having the opportunity to tap back in to what we do best. We’ve been working with new producers and experimenting with new ways of going about the process. Our collaborations always take on a whole new style/sound because we’re constantly pushing each other to that next level.

What Can we expect from you guys here in the near future?

A lot of new music we’ve had sitting in the vault for a few years now. We are extremely excited for everyone to hear these records. Tons of different sounds and rhythms, plus some exciting features!

We can all expect major things here in the near future from both Kris Flair and Kris Moody. Be sure to check out their new single “Denim” out now on all streaming platforms & follow their instagram all linked below.