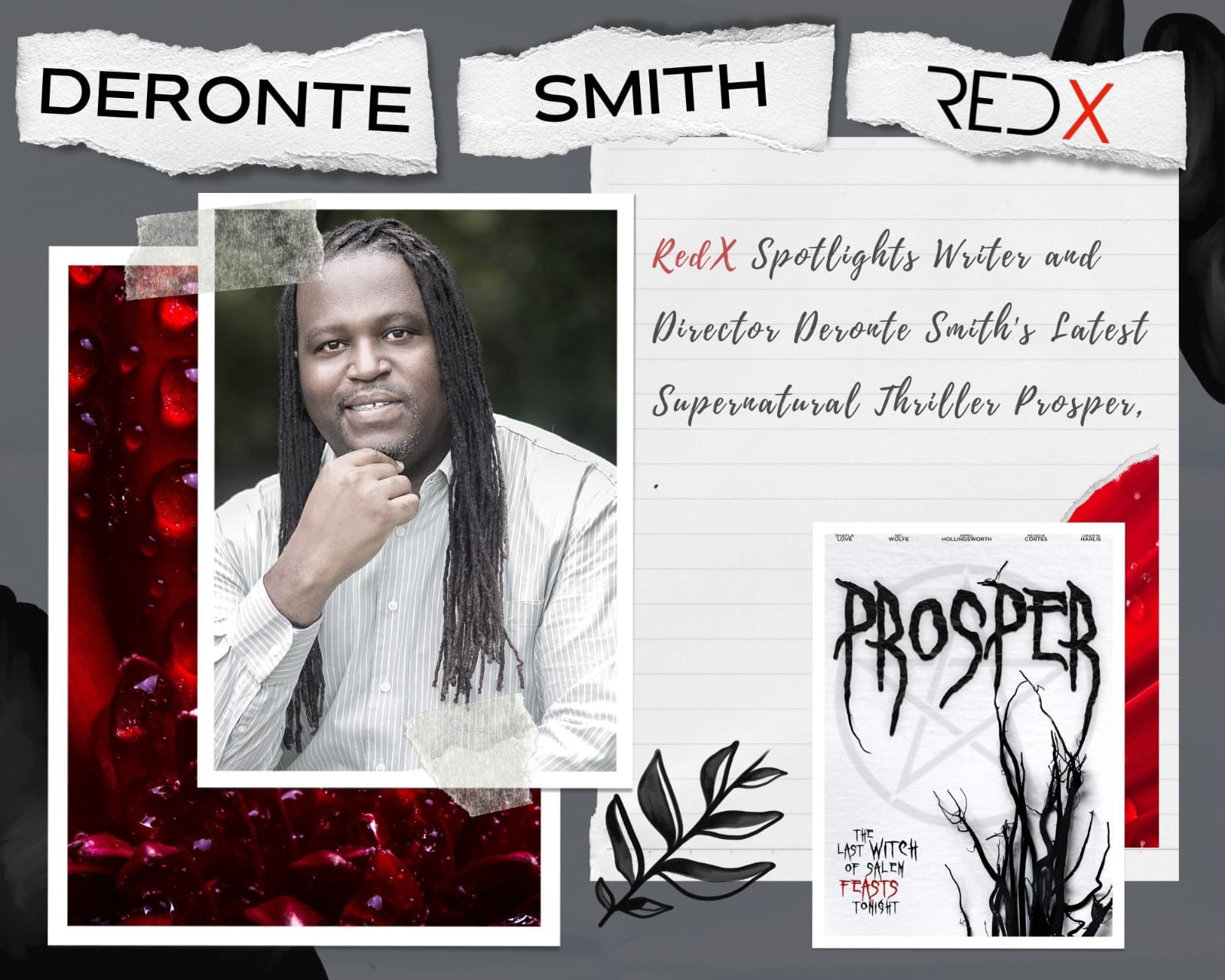 Greetings to all the fellow horror lovers!

We are here to discuss two distinguished presences in the horror films world; ‘Prosper’ a marvelous piece of horror and its creator, the renowned director, writer and producer Deronte Smith.

Let us explore the key aspects of ‘Prosper’.

Understanding the Context of the Title:

The title of the movie itself creates a suspense. One can easily become curious by looking at the title which apparently does not signify the traces of horror in itself. However, the director of the movie, Deronte Smith, has beautifully explained the meaning and context of the title and its links to horror world in following words.

“The movie’s title is ‘Prosper’, based on the exacting nature of the witch’s means of securing her prosperity. It is a false promise she makes to ensnare young minds into a deadly trap.”

About the epic masterpiece ‘Prosper’:

There will not be any true lover of horror films who would not have heard about the ‘Prosper’!

This is because the movie has roots in the real happenings and it is one of the world-class horror productions.

The movie is about the descendant of the most famous witchcraft cases of pre-colonial era: Salem witch trials, which resulted into the prosecutions of people accused of witchcraft in pre-colonial Massachusetts between February 1692 and May 1693. More than two hundred people were accused. Thirty were found guilty, nineteen of whom were executed by hanging (fourteen women and five men).

Actually, the movie starts from the set of these trials during which a baby girl, one of the descendants of the first accused lady in this case, manages to flee and save her life. Later on, she needs to reinvigorate herself for which she had to trap the people for making them their prey.

‘Prosper’ is going to keep you awake inn the night and screw your mind!

The quality of the movie can be judged from the target it is set to achieve. While making this movie, the director had set an epitome of target that any horror movie must set an ideal in context to the impact it should have on the viewers.

Deronte Smith has expressed his target regarding the movie by expressing that, “I set out to make a movie that is going to creep you out when you’re alone, keep you awake in bed, and really screw with your mind. I’m told I did that ten times over!”

Quality of the effort put into the making of ‘Prosper’:

When the expectations from the lens work are too high, the team goes to any extent to produce the masterpieces. The dedication of the production team regarding ensuring quality of the work can be judged from the fact that they had to risk their lives by filming the scenes in the premises of a location that was itself haunted in reality.

In this connection, the writer and director of the movie, Deronte Smith has said, “People have asked me ‘Why does the movie feel so real? I tell them it’s because the primary location was actually haunted and it comes across in the movie.”

Thus, it is quite evident that when the targets were high and the efforts put in the production of the movie were unmatched, the results were destined to be outstanding.

Let us analyze the accomplishments of the movie based on the expectations of the director and the response of those for whom it was created i.e. the viewers and the cinephiles.

The director of this horror masterpiece expected that the movie will boost his professional career by opening new doors for him. On his front, the movie has returned him with many fold more outputs. It is so far the most popular production of Deronte Smith. In this regard he has declared, “‘Prosper’ has exceeded my expectations.”

Now, let us have a look at the reviews of the viewers and the people having excellence in the field off movie-making.

Darrin Ramage, the CEO of Midnight Releasing, has put it into the words by saying that “Prosper is a wild movie with a vivid depiction of the occult. It combines nail-biting suspense, fun pop culture and a bizarre fascination with Satan.”

‘Prosper’ finished 2015 as a top 10 finalist for best “Horror Film of the Year” by fan-favorite Horror Hound magazine.

The response of the viewers can be judged from the ratings of the movie. In this connection, we will have a look at the IMDb rating because it is considered as one of the most trusted and credible sources of judging the success or failure of a cinematic work. ‘Prosper’ has been rated 8.1/10. This number shows that the movie is an impressive success.

About the Writer and Director, Deronte Smith:

Deronte Smith is also a distinguished writer. He wrote and published his first book, a young adult fiction title called The Fantastical Adventures of Sleepy Steve, in 2005, which sold nearly 100,000 copies over the first 18 months.

‘Prosper’ holds a significant position in the list of the accomplishments of Deronte Smith. He always rejoices the status he earned due to this movie. In this connection, he has been found saying that “I feel honored and blessed by the way people have responded to this movie. Yes, of course, many have expressed their fright and horror while watching the movie, which is the point I suppose. But many more have given praise for what we were able to accomplish. Prosper has given me more opportunities than I could have imagined, and all because I took the risk to make a movie that many didn’t think would happen.”

Click link below for all available streaming platforms: https://midnightreleasing.com/filmcatalog/prosper/