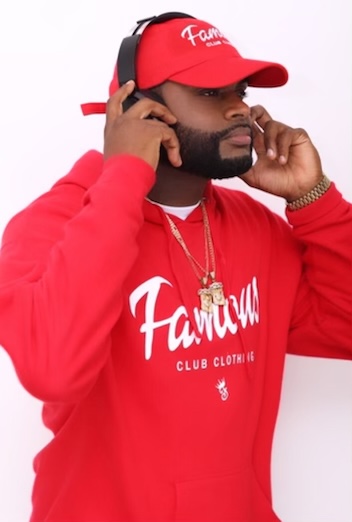 Q. At what age, did you start in the world of music, and what motivated you to do it?

I was 15 years old when I started making beats with my cousin and all we had at the time were drumsticks and a cheap Casio piano. We really got moving when we got a PlayStation and there was a game from MTV called MTV music generator and that’s what we used, my love for music came from my mother. She was always playing music in the house and my older sister always singing. I have a big family so my older cousin’s house would always have music playing. My older cousin always tapped into hip-hop and Latin music; I think the idea of being able to change a person’s mood through music was what did it for me. The hype behind the reason a person went from being down and out to being in good spirits through music.

Q. What musical style do you feel most comfortable with and what genre would you dare to play in the future?

I am a very diverse DJ, so playing any genre isn’t hard. Being that growing up I listened to hip hop, Latin, pop, rock & roll, alternative, indie rock and freestyle. My family was so different from each other when it came to music.

Q. Which musicians have influenced you? What qualities do you think make a great DJ?

I would say as far as an artist goes cool j,wu tang clan,a.Z & nas dmx & swiss beats, as far as DJs I would say DJ red alert,DJ drama,DJ prostyle, DJ clue diplo & DJ werd da mouf. I think to be a great DJ practice, practice, and practice comes first. Knowing your music and not just knowing what beat matches. I’m talking about really knowing the music and understanding that every set shouldn’t be the same because every crowd isn’t the same. Really understand how to connect with the audience you play for.

Q. You Have worked with Afro B, how did that come about?

I met Afro B on Instagram, heard his song on Soundcloud and searched him up. The song isn’t playing on New York radio yet and I messaged him and was like “Hey brother I think your song is dope I’m not sure where you are from but if you are ever in new york I would like to link with you, bring you around and meet some other DJs. After that, he was in NY and we got together. At that time people were hearing his record on the radio (jo,anna). I set up some interviews for him and he got to work “He definitely hustles, and his work ethic is crazy, after that we built an amazing friendship. It was built organically and the rest is history, that my boy. Shout out to team salute too!!

Q. You have worked for artists like Red Cafe, Afro B, Neyo, among others. What would you say has been your best experience and your hardest project?

My experiences have always been different, every artist brings different vibes and different energy. But the outcome has always been great.

Q. What sets you apart from other DJs?

My thing is being myself sets me apart. I don’t DJ like anyone else and no one DJs like me. So Imma just go with my own individuality that sets me apart just being me.

Q. What inspires you when producing music? Could you tell us about your upcoming releases and release dates?

My inspirations come from things I’m going through in life or what I see in my mind that should be out in the world. Musically I never want to sound like anything that’s out or follow any trend that’s going on right now. I’m working on my DJ album titled “See me now” set to release in February 2023.

Q. How do you see the music industry in 10 years? What are your goals for then?

Music is forever evolving especially rap, hip hop, r&b. I just want the music to be good, lol I don’t want artists being lazy. I want them to continue to pour everything they got into their music. If that makes sense, some goals I have set for myself is having music that has charted on billboard, my own radio show, and my podcast(thepartystarterspodcast) to be one of the best out, if not the best then top 10 for sure.

Maserati Gatti Is The Rising Star From Brooklyn