'Gangs and Gurus: An Interview With Allen Brooks' 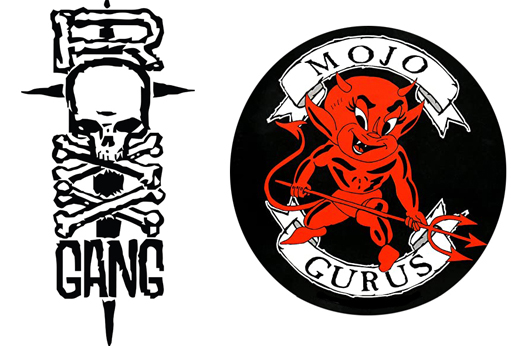 When did you join Roxx Gang Allen?: I was contracted in 1996 as the new official bassist for Roxx Gang and I still have the contracts to prove it….. I felt like it was an amazing opportunity, and I was very excited to be in the band. I was actually a huge fan of the band from seeing their videos “Scratch My Back’ and ‘No Easy Way Out’ on MTV. Kevin always had what is called the ‘It’ factor. His aura was huge! He did what few have done and that can’t be taken away from him. He was an incredibly awesome front man and a local legend where he comes from in Florida… Unfortunately, by the time that I joined the band in 1996, Kevin was pretty burned out on the whole Roxx Gang sound / image thing and after I had performed only a few shows with the band, Kevin decided to change direction and start a whole new secondary music project. So, the Roxx Gang band members from the 1996 line-up started playing traditional blues covers while also writing original songs in what Kevin had named Mojo Gurus. From that point on we started working under both names of Roxx Gang (hard rock) and Mojo Gurus (traditional blues).

I thought I was joining (The) Roxx Gang that broke guitars onstage and destroyed hotel rooms after the shows..wink/smile… But I found myself sitting on a bar stool while wearing a 5-gallon cowboy hat… WTF… Mojo Gurus were ultra-cool and all but not exactly what I signed on for… Kevin wanted a change though. First Kevin and Brett kept pushing me to move to the Tampa area from Orlando, but I was given zero financial help to make the move and get settled and then shortly after my move, I was asked to cut my long hair off fore I had long hair when I joined the band. I remember that we all met at Kevin’s house before my first big Roxx Gang show at The State Theater in St. Pete and Kevin freaked out because I was decked out in rubber pants and a really cool white tux with tails (no shirt).. I looked killer….. But…. He made me change into a pair of his old bell bottom jeans and a vest with flowers on it. WTF…. We later shot a pro video that was never released, and I remember Kevin told me that day that I was fat…lol… You can look back at pics from then and see for yourself. I wasn’t fat, I just was not a human skeleton. We still did do some big signing events at Guitar Shows in Orlando and Tampa as Roxx Gang but pretty much did all of our shows in 1997 and on forward as Mojo Gurus.

Is it true you only made $100 in three years?: Yes, unfortunately because of really bad management and a bad overall game plan, neither project ever made any money what so ever. In my three years as bassist for Roxx Gang / Mojo Gurus, (1996, 1997 and 1998) the official band members were paid $100 each one time after a sold out show in Clearwater, Florida at Gasoline Alley. That’s it! Let me repeat that…. Each Roxx Gang / Mojo Gurus band member made $100 one time in 3 years… There was always that carrot to chase for us as band members, believing there was some pot of gold at the end of the rainbow. Of course there wasn’t. I finally quit chasing carrots and started making money on the side playing in local cover bands like ‘Smoke & Run’. I was told Kevin hated that I was doing other gigs on the side but in my defense, I still had to fucking eat and pay my bills…

Do you know why the band lost their record deal with Virgin?: From what I was told by insiders, the biggest real issue was that original Roxx Gang guitarist, Eric Carol, who wrote the songs on the first album that got them signed and put into the history books was killed in a car accident shortly after the first album was recorded. They tried to move forward but without Eric to write new songs for album #2, Virgin dropped the band from the label. They were later picked up by Perris Records where they remained while I was in the bands……

Why did you quit Roxx Gang / Mojo Gurus?: Being in a band is like being in a relationship in many ways and sometimes things are said that can’t be taken back as what led to me leaving the band. Back in 1998, I called Stacey one day to get some shit off my shoulders about the bands and he must have handed the phone over to Brett (Kevin’s brother and Roxx Gang/Mojo Gurus manager) because all of the sudden Brett told me clearly that if I really felt that way I should quit. So I did quit, citing ‘Creative Differences and Lack Of Financial Fulfillment’. All I really know is that before I called Stacey I was in the band and after I called Stacey I was not in the band any longer. I do admit to saying some very hurtful things about Kevin and Brett. All of which in my opinion were true but was still not meant for their ears. It was a private fucking phone call. Stacey Fucked Me Hard! No Lube! Just A Good Dry Fucking!

So…. It was over and there was nothing that I could do but keep on moving on.

I have tried hard to forgive Stacey for what he did to me but it has been very difficult. If he was really my friend, he would have listened to me and told me to chill out. Yes, I should have never called him and quickly realized I should have never considered him to be one of my best friends. Bad on me! And to think I had just finished recording all of my bass and vocal parts for the first Mojo Gurus CD. I’m guessing Kevin removed me from the CD, the artwork and the credits. I never looked into it and I’ve never publicly spoken of my time in Roxx Gang / Mojo Gurus but now that I am almost 60 years old, I realize this is part of my legacy and I deserve to be recognized for the years I spent in Roxx Gang and also as a founding member of Mojo Gurus.. A video popped up on my feed recently of Stacey on Ryan Roxie’s podcast called ‘In The Trenches’ which is what kind of got all this started up for me. After watching the podcast I contacted Stacey more than once and offered him the chance to clear things up with me one way or the other, fore we have never spoke after that fateful phone call back in 1998… But he never responded to my emails… In my opinion Stacey is obviously a weak and pathetic excuse for a man. No substance! Zero integrity! (I was even told that back in the day, LA Guns were going to audition me as bassist and Stacey shot it down. Don’t know how true that is, but that is what I was told).

What about the other band members?: Jeff Vitolo (guitar) and Tommy Weder (drums) are exceptional human beings and I have huge love for them both. Surviving during those days was tough and if it was not for Jeff Vitolo and Dan Campbell (Savatage / Roxx Gang stage manager), I would not have made it….. Thank you Jeff! Thank you Dan! I’ll never forget how good you both treated me!!!! God bless you both!

Did you get along with Kevin?: We got along but in my opinion Kevin was not a very nice person back then and as I watched everyone bend over backwards to kiss his ass, I just couldn’t do it. He had a huge chip on his shoulder and was usually a real asshole! I really tried to be his friend in the beginning but he would have no part of it so I treated it as a working relationship and that was that. I remember being backstage at one of the Livestock festivals in Tampa and I got to hang out with Jeff Taylor who was the original guitarist for Roxx Gang. Jeff Taylor treated me better that one night than Kevin Steel did in the entire 3 years that I was in his band. Sad….

An audio interview with Kevin came up on my feed at YouTube a while back, so I gave it a listen. It was a great interview until he started slamming Stephen Pearcy of Ratt for still wearing the leather pants and still doing the old Ratt songs, when in actuality If Kevin would have just kept performing as Roxx Gang, he and the band would still be very relevant today. The thing is this, I always looked up to Kevin and he could have been not only been my best friend but also my mentor if he had only chosen to do so. He could have built me up by encouraging and teaching me instead of tearing me down with constant smart ass comments and low grade insults.

Any last thoughts to close this interview?:  Even with everything I have said here today, I must admit in all honesty, it was really good to hear Kevin’s voice in that youtube interview… I’ve always hated that this all happened back in the day and I still sometimes wake up in the middle of the night shaking my head wondering what the fuck happened…..

I really don’t hold any grudges against Kevin or Brett in any way shape or form. I really do mostly blame myself for making that call but also hold Stacey responsible for my early departure from both bands (Roxx Gang / Mojo Gurus)…..

But anyhoo… It wasn’t all terrible…. There were some good times too… Like opening for Ratt at Janis Landing in St. Petersburg, playing the Hemp Fest in Tampa and meeting all of the fans at our signing events… Most of what I’ve said here can be backed up by other members and the youtube video Roxx Gang/Mojo Gurus 1996 – 1999. It is what it is! I can’t completely explain three years of my life in a basic one page internet interview like this but I will say in closing that I still very much consider myself to have been a team player and an asset to both bands, while always doing my very best! I really do cherish my time spent as an official Roxx Gang / Mojo Gurus band member and greatly miss many of the incredible people I met along the way……. – Allen Brooks

DJ Allure is BACK with “Jolie”