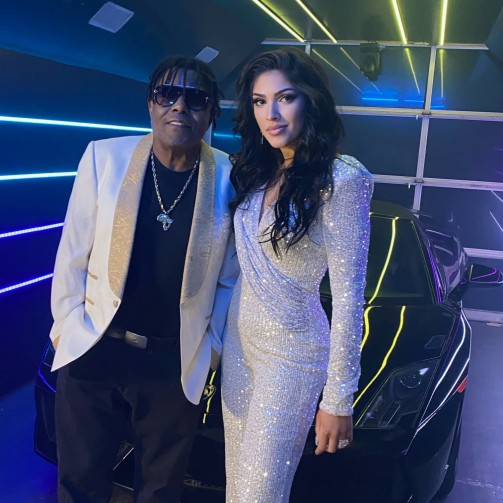 Global singing sensation and electrifying performer Natalia Damini is releasing a new song titled “Attitude” featuring the one and only Tito Jackson from the legendary group The Jacksons. This single follows her last release entitled “Pacemaker,” which peaked at #45 on the Mediabase Top 50 chart and has over 1 million streams on Spotify. Equally important, her song “Crazy” hit #1 on the Billboard Emerging Artist Chart. Natalia has over 1 million followers on Instagram.

Cutting Edge is the adjective that describes the stunning songstress, Natalia Damini. She adds class, intellect, and style to her genre. She crafts songs that capture the essence of the human spirit. She spins stories of love, lessons learned, conflict and resolution. Ms. Damini approaches every note with fearless class. Her voice is pure and authentic. Her energetic drive and outgoing personality enabled her to showcase her amazing stage presence at many different venues around the world. In October 2015 Natalia won Best Female R&B/Pop Artist at the prestigious Underground Music Awards.

Natalia Damini’s style is a unique blend of modern R&B, Pop, and Dance music that ranks her alongside contemporary stars like Ariana Grande, Doja Cat, Shakira, and Rihanna. Natalia’s new single features Tito Jackson of the Jacksons (yes, brother of Michael and Janet). The Jackson Clan is the most famous musical family in the world. The single and video for “Attitude” will be released March 17th, 2023, on Concore Entertainment/Sony and it will be available on all streaming platforms on March 17 as well. And ironically that date is Natalia’s birthday. So, make sure you download, stream and share.

Natália Camurça Carvalho, is a singer and songwriter. Born in Fortaleza, Brazil. Natalia Damini started her career at 17 years old with her first single Feeling The Love, which became a very popular song in Brazil. At 18 Natalia moved to São Paulo and released her second single Your Lies which went No. 1 on the international dance sales charts, and she was nominated for Best Dance artist at the Dj Sound Awards. Natalia teamed up with Charve The Don, Concore Entertainment CEO and released her Bad Girl EP which debut on iTunes Music Pop Charts at No. 32[ and then she went on to release her debut album Beautiful in 2014, which reached No. 16 on iTunes Music Pop Charts. The album features Nicki Minaj, Gucci mane and The Shop Boyz . Natalia also teamed up with Lil Wayne and Rezzo on the single Can’t Stop Me. Natalia Damini is the first artist from Brazil to have a major presence in the American music scene and has been featured in some of the biggest publications in music and she graces the cover of numerous magazines.

Electrifying Pop singer Natalia Damini has been making some global noise for the past few years and now she is back with a monster track titled “Attitude” featuring the legendary Tito Jackson from The Jacksons. In October 2015 Natalia won Best Female R&B/Pop Artist at the Underground Music Awards. Previous winners: Nicki Minaj, J Cole, MGK and Lil Mama. Natalia has already had great success, her song “Crazy” hit #1 on Billboard Emerging Artist Chart, #1 Spotify (Top 25 Most Played Songs, in September 2015) #9 on Billboard Trending 140, #15 on Billboard Next Big Sound Chart and her song “On The Floor” hit #1 on DRT (Digital Radio Tracker) Independent Chart and #35 on DRT National Chart in 2017.

Related Topics:Natalia Damini
Up Next

DJ Tomer & Ricardo Ft. Mei-Tar’s “House on a Hill” Is a Global Success