How to Become A Professional Soccer Player, A Guide By Victor Parra 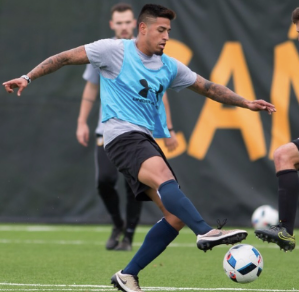 If you have ever wanted to land that dream scholarship to play soccer in university and later become a pro soccer player, then you are going to want to continue reading. Victor Parra has been on the radar of soccer scouts since a young age. This allowed him to secure a full scholarship to play soccer in University in California and he later turned professional with his first contract taking him to Portugal. We asked Victor for his best advice to young people who want to play soccer professionally and here’s what he had to say.

‘’In my opinion, young players should work on two things initially:

1. Speed of play: if we look at what separates the amateurs from the pro’s, oftentimes it is speed of play. If it takes you too long to take 2-3 touches in the professional leagues, there will be a guy on you faster than you can imagine and they’re already on the other end of the field before you know it.

2. Fitness level: in the pro’s, everyone is super fit, even the goal keeper. So you need to be too’’.

How can young soccer players best prepare themselves to go pro?

‘’I would say, they should start by working on their technical ability, your skill, your passing, your creativity. As a young player, you’re going to grow stronger. But it’s harder to teach skill and creativity than it is to teach strength and fitness, so work on this early. When I was a young kid, I would play on the streets against 20 year olds and that’s what made me the player I am today, learning from them and learning skills and creativity’’.

Victor went to the #1 junior soccer college in the USA, called Monroe in New York. He did very well there and made All American. He later received a full scholarship to university in California for soccer, where he was awarded top student and valedictorian of the school. Parra is passionate about helping others and he is always happy to share his top tips with young aspiring soccer players.

An Inspiration For All The Fitness Enthusiasts, John Derae Laster