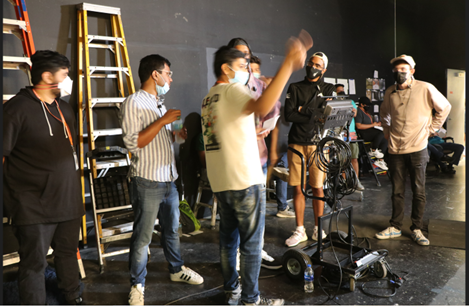 Local filmmaker Kapil Ghatwai has received critical acclaim for his latest short film, The Shoeshine Kid. Set in New York, the film tells the heartwarming and poignant story of a young shoeshine boy named Michael, who dreams of owning a pair of new sneakers that he cannot afford.

Despite facing adversity and poverty, as well as an abusive father, Michael never gives up on his dream. He continues to shine shoes and save every dollar he earns, determined to make his dream a reality.

The film is a beautifully crafted and emotionally powerful portrayal of the resilience of the human spirit. Ghatwai’s masterful direction and storytelling have earned him numerous awards, and The Shoeshine Kid has been selected for screening at prestigious film festivals such as the Japan Indies Film Festival and the Goa Short Film Festival.

One day, Michael shines the shoes of a kind single mother, and he is immediately struck by the beautiful sneakers that her young son is wearing. He realizes that he has always wanted a pair of sneakers just like those, but he knows that he cannot afford them.

As Michael continues to struggle, the single mother notices him and is moved by his determination and hard work. She decides to help him out, and she offers to buy the sneakers for him.

The film ends on a triumphant and heartwarming note, as Michael finally gets the sneakers he has always wanted, thanks to the kindness and generosity of the single mother. It is a beautiful and inspiring portrayal of the human spirit, and the power of helping others.

Ghatwai is an independent filmmaker, and he self-funded the production of The Shoeshine Kid. His dedication and passion for the project is evident in every frame of the film, and his hard work has paid off with rave reviews from critics and audiences alike.

The Shoeshine Kid is a powerful reminder of the transformative power of hope and determination. It is a must-see for anyone who believes in the potential of the human spirit.