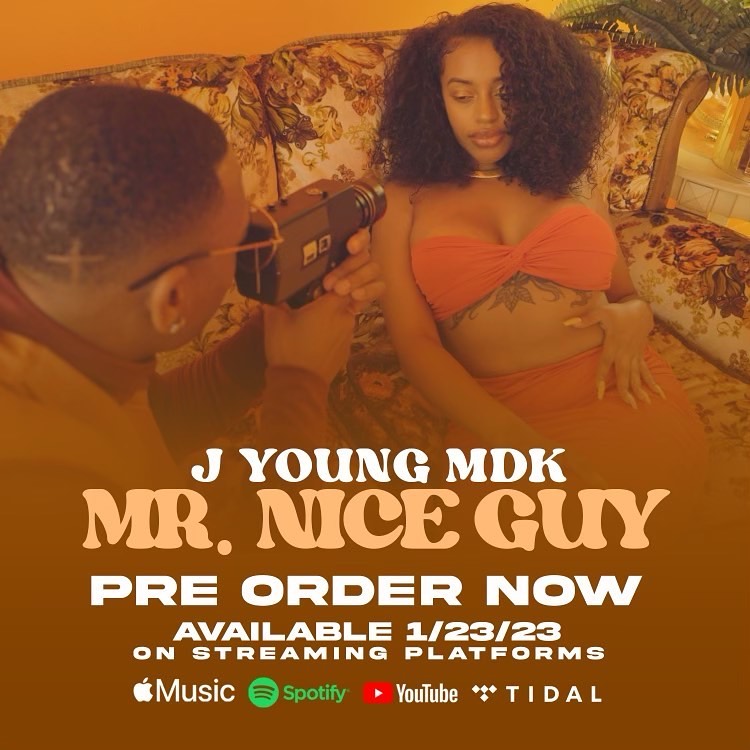 Clocked in a 70’s-themed setting, J Young raps as his love interest makes small movements that suggest her underappreciation for the nice guy. His flow on the track is reminiscent of an early Kendrick mixed with Drake but undeniably J Young’s own flair. He took to social media to present his fans with a preview and behind the scenes look at the single’s production. Though the visuals have a retro vibe, the song is very much a modern day trending song waiting to happen.

At this point, J Young MDK has shown how versatile he truly can be as an artist. He has touched on hip-hop, pop, alternative, and now funk in the past 10 years alone! His most recent hits gritty single “Misconceptions” and nostalgic track “Grandma’s House” ended his 2022 in a stellar way. He is on track to release his 5th album this year after the string of hits that have immediately gone to charting status. This includes a feature on Jamie Foxx’s single and  soundtrack  “Mowing Down Vamps (BUD)” for the Netflix ‘s #1 comedy-thriller, “Day Shift”.

J Young MDK, also known as Jermaine Carter, has known what he wanted to do since he was a teenager. From the jump, he saw a future career in music and began to compete in rapping contests as well as building a loyal following over several platforms. In 2020, he made musical history by being the first artist to release 2 full-length albums in hip-hop and R&B on the same day! His perseverance was especially visible when he joined the “Monster Energy Presents: Latto 777 Tour” early 2022.

He has also branched out into the acting world with roles in “A Hip-Hop Christmas Wedding” and “Mixed Girl”. J Young MDK took the leading role and co-producer in “Mixed Girl” so seriously that the Micheaux Film Festival nominated him for “Outstanding Dramatic Actor”. Limitless is the name of the game as far as J Young MDK is concerned. “Mr. Nice Guy” is projected to release on Monday, January 23rd to multiple streaming sites. Download your copy and follow J Young MDK at @jyoungmdk on social media .

As an actor, he played Hussein Fatal in the 2017 movie All eyez on me. He appeared in a 2016 episode of the series The Coroner: I Speak for the Dead and an episode of Music & Murder.

He was named the ‘Freestyle Champion’ of the ‘Roc the Mic’ tour led by Jay-Z after winning a rap battle between himself and Classidy in 2006. He was invited to become a host/artist on a popular DVD series entitled Cheddar volume 9 in 2008.

Related Topics:J Young MDK
Up Next