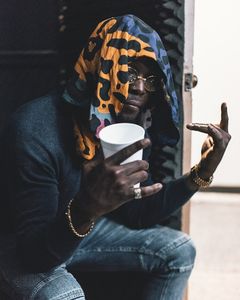 Meet Uprising emerging Artist Jiggy Germ, who was born and raised in New Jersey. He has a great musical element in him. Jiggy started pursuing his career in music at a young age by writing his own lyrics and recording his own vocals. Since then, Jiggy continued performing at shows/venues, open mics, music videos, and engaging in photo shoots, etc which gave him amazing branding and a great name throughout New Jersey to Hawaii. He always knows that with his hard work, everything will work out great.

Later, Jiggy moved from New Jersey to Los Angeles, where Jiggy became more passionate about his music career. In Los Angeles, Jiggy gained popularity, but he still decided to venture and moved to Hawaii. Jiggy also focuses on the audience that is yet to hear him sing or rap, both internationally and locally.

The uprising emerging artist Jiggy Germ took the music industry to the next level with his new single: Way Out, which features Mr. Chicken, shot by Dolo films, and directed by Stood. Multiple other artists, Jiggy also has some people who have inspired his music career including The Lox, Jay-z, Fabulous, The Hot Boys, Dipset, Snoop Dogs. Missy Elliot and a few others. Jiggy had learned from them that persistence and hard work are paramount in all careers including music. From Hawaii to Atlanta, Jiggy has released two amazing E.P (Extended Play) titled Lawd Jiggy and Y.K.W.T.F.G.O.

In his Y.K.W.T.F.G.O E.P, Jiggy has made him get multiple invitations in the industry. Jiggy has also performed on the stages like SXSW and A3C several times and definitely making a great mark in the industry. Within two months, Jiggy Germ’s song titled Way Out gained a lot of attention on all social media platforms. According to Jiggy, that is only the beginning; there is more yet to come for his fans. He advises the beginner artists to be original, unique, invest in themselves, and be their own boss.

To learn more about Jiggy Germ’s, you can visit his Instagram, and also keep supporting him for his new song Way Out, which is taking music on another level. You can check all the links.

MOBSTYLES: Is Turning Dreams Into A Reality

DrexxBeats Rising with an Incredible Album On The Way, The Take Off