Nick Nolte Stars In Rittenhouse Square, A Story Of Finding The Light At The End of The Tunnel 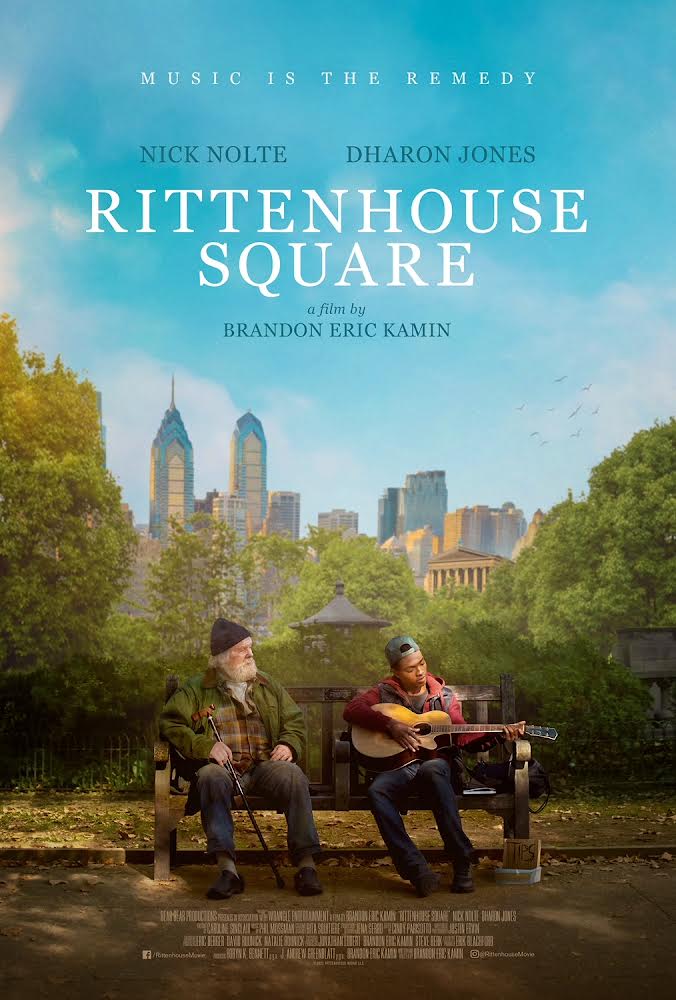 Rittenhouse Square is one of the most anticipated releases of the year. The film, directed by Brandon Eric Kamin was shot in Philadelphia and was filmed in under three weeks during the fall.

The film was written as a fictional story, but is deeply rooted in Kamin’s upbringing and touches on relationships throughout his life. Kamin grew up in a blue-collar area as one of only a few Jewish families, which often resulted in bullying and feelings of marginalization. As an individual who has overcome a tumultuous childhood, Kamin has always advocated for and wanted to spotlight underdog stories.

Rittenhouse Square is the story of hope through friendship and music in the midst of dark times. We follow a young street singer, KJ, stricken from mental health issues after the constant pressure of following in his deceased father’s footsteps. Losing all sense of faith, he contemplates taking his life until a homeless veteran, Barry, inspires him to reconsider. Their budding friendship after that creates a bond that helps both of them find purpose.

Rittenhouse Square, in particular, is an iconic landmark in Philadelphia, Pennsylvania. Kamin describes it as a “continuous melting pot of personalities and memories that unfold before your eyes.” Having lived locally for a decade, Kamin has always utilized street music as a personal source of therapy. Fusing all those ideas together spawned what is RITTENHOUSE SQUARE.

Nick Nolte is particularly important to Kamin and the film as a whole. In a recent interview, Kamin states that “I wrote this movie for him and couldn’t believe upon receiving word that he was interested.” When the two first met in pre-production, there was an instant bond formed, and from that day forward, they were running lines 2-3 times per week on Zoom for months leading up to production. Nolte proved his dedication and presence throughout the entire production process and it shows in his performance. Kamin remarked that working with Nolte was hands down one of the greatest experiences of his life. The guy is a national treasure!

Rittenhouse also features emerging talent, Dharon Jones, who carried himself like a true professional on and off the set. The film happened to be Jones’ first film and he did not disappoint.

Kamin wanted this film to convey the message: We got one shot at this life thing, so take a swing. Every character in the movie is overcoming personalized battles, similarly to real life. They’re all individually going against the status quo, yet each character finds a way to prevail and persevere with humility, friendship, and belief in something greater than themselves. Additionally, he encourages the audience to pursue their interests and what they love. While life can be a challenging course, it is imperative to remain strong, kind and hopeful for the endless possibilities in the future.

One of Kamin’s most prominent goals with this film is to create discourse around some of the important topics in the plot. Kamin mentions that they touch on several topics “including divinity, LGBTQ+, single parenting, homelessness, mental health, and more.” Furthermore, he states “should the film encourage even one person to lend or seek a helping hand, then I’d say that’s a bigger achievement than any box office performance”

Throughout his life, Kamin has certainly faced tumultuous challenges and faced great adversity. When reflecting on where he is today, Kamin exclaims “10 years ago I was scrubbing toilets on my hands and knees in East Falls while making mom/pop commercials to get by. Now I’m answering PR questions about what it’s like to direct Nick Holte in a movie.” His story is sheer evidence of how one’s life can change in the blink of an eye.

Looking forward, Kamin hopes the film lands in the hands of a large streaming platform or network. Nolte and Jones also punch in a pair of incredible performances, and he hopes they receive the recognition they earned and deserve.

This movie is premiering at the Philadelphia Film Festival this month. Be sure to check it out.

Behind The Comedy: Sit-down with King Tito & Dirty Dell (The FG Camp Show)