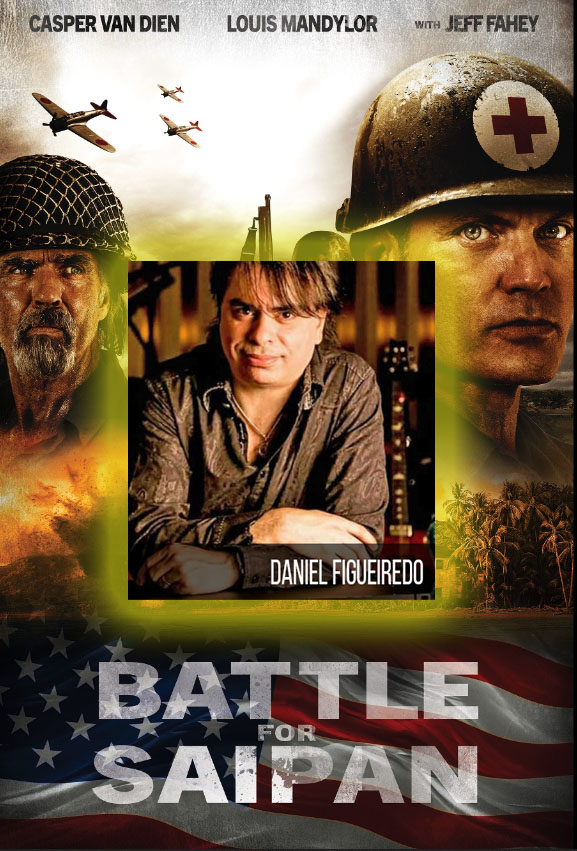 It’s November and the pre-holiday theatrical film rush is on with Saban’s latest, Battle For Saipan.

Saipan features a veteran cast of the WWII action film Battle for Saipan which hails from director Brandon Slagle. The movie, which is being described as a full-on war epic with blistering hand to hand fight action, stars Starship Troopers alum Casper Van Dien as well as Louis Mandylor (The Debt Collector films) and genre favorite Jeff Fahey in an original production from the Hillin Entertainment team of Daemon Hillin and Carolina Brasil.

Saban Films will be unveiling  this latest  theatrical release mid-month.  And although director Slagle is no stranger to action after having directed multiple horror films  such as Escape from Ensenada and the sci-fi action hybrid Crossbreed, this films score strikes a fresh cord with action adventure fans familiar with Slagle’s work.

This interesting musical approach can be credited to veteran Brazilian film score talent, Daniel Figuereido, now based out of Los Angeles.

Figuereido is well known to global film audiences with his extensive pedigree including written music scores for over 20 TV series broadcast in over 150 countries, besides many films. Successful telenovelas soundtracks such as “The Mutants: Pathways of the Heart,” “Opposite Lives,” “The Law and The Crime,” “Joseph from Egypt,” “The Promised Land,” and the successful Moses and the Ten Commandments.

Daniel holds the record as the “Greatest number of songs in simultaneous execution in a TV series.” Between February and November 2017, he had 794 songs played in a single TV series. As a songwriter, he participated as a composer/performer in over 16 thousand recordings.

The music and film industry in Hollywood has been quick to notice Figueiredo’s trademark style, leading to several high-profile projects such as his scoring for the highly-anticipated telenovela The 10th Commandment .

But as with any film score professional, there is always the challenge of conjuring creative and visionary notes on tight deadlines. For his part, Figueiredo remains game for the challenge s scoring presents to his creative abilities  and limited time.

“The biggest struggle was how this project had a huge amount of songs and very short deadlines. I had to make sure the songs would be always sent in time.” Figueiredo said.

Daniel is also a busy recording exec in his role as co-founder and CEO of the companies MusicSolution (music production for films and TV), Up-Tracks (music library),  and Audio Xpression (digital audio applications).

As an emerging TV/Film composer, entrepreneur, and Music Producer in Hollywood, Daniel Figueiredo keeps expanding his collaboration with the music business while overseeing the widely-awaited launch of his XpandMusic record label.

XpandMusic’s catalog can be found now on every music streaming platform.

Here is the 2nd post idea. We talk about the brand new film on theaters now Maneater.

And some links about the film.