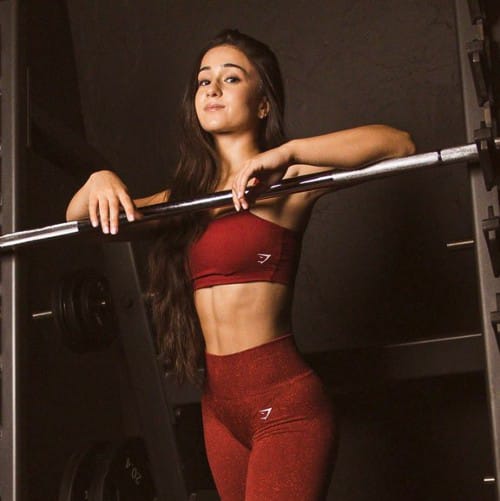 This is the tale of a young lady who had the confidence to trust in her ability. The now-famous fitness influencer Nona Bayat and her brother moved from Iran to Los Angeles with their parents when they were children to seek better opportunities. Her interest in fitness activities like swimming began at an early age, and she swam for her high school’s team from the time she was 12 years old until college. But she always had a passion for fitness, so at 17, she signed up for the gym; even though she could not afford a personal trainer at that time, she spent hours upon hours researching on youtube, google, and talking to bodybuilders to become more knowledgeable about weightlifting making fitness has been a huge part of life.

Even though Nona Bayat is well-known now for her dedication to fitness, it was not until when she finally gave in and downloaded the much-touted app Tik Tok in 2020 that it all began. She discovered there needed to be more health and fitness-related content. So, without giving it any thought, she filmed herself going through her normal gym routine and ab workout and uploaded it to the app.

As a result, she gained a sizable following on Tik Tok, and her video became viral the next day, amassing over a million views on the app. After realizing that social media offered a way for her to combine her two greatest loves—practicing her passion and helping people around the world—she began to receive outreach from companies like GymShark, one of which she ultimately decided to collaborate with because their beliefs are similar to hers.

She has also been an ambassador for the plant-based supplement company OneSol for the past six months. Her friend and his wife started OneSol because they are both committed to gut health and providing individuals with safe, effective dietary supplements. But the fact that they appreciate their customers so much that they listen to and act on suggestions to improve the brand was the deciding factor in her decision to collaborate with them.

Nona Bayat received her degree in psychology at the University of Los Angeles, California (UCLA). In addition to being a recent UCLA alum in psychology, she is also a first-generation college student who recently graduated from the University of Los Angeles, California (UCLA). She always knew she wanted to be a doctor, so she spent a lot of time as a hospital intern learning from medical professionals. In January 2020, she applied to medical school and was accepted, and when her rise to fame began, she was forcing herself to juggle between her two occupations. But for the time being, she is a full-time content developer aimed at improving people’s lives by promoting health and fitness.

After waking up at six in the morning, unlike everybody else who would look at notifications or scroll through their phone, she avoids all forms of electronic stimulation for the first two hours of her day. Hence, her day begins by stretching her entire body, pouring herself a cup of tea, and, if the weather permits, she reads at least ten pages from a self-help book or a book about personal finance.

After finishing her breakfast, she goes to the gym to begin her day, where she follows a different program each day. If you ever run into her at the gym and ask what her must-have fitness item is, she will, without fail, tell you a set of dumbbells because they are compact yet effective for working out your entire body.

After a thorough workout, a protein shake or a healthier version of Taco Bell’s beef crunch wrap is her go-to meal since they replenish the nutrients she’s lost during her workout. Also, she likes rice, pasta, or potatoes with her chicken or fish. A salad or sauteed veggies are served on the side. When the workday is over, she ensures everyone is okay at home because family is always the most aspect of her life.

If I continue any longer, then you’ll have to read through the whole day’s amazing work she has been doing, but all in all, getting fit is a choice that requires hard work and determination. Nothing comes easy in life; you have to chase it the way Nona Bayat does because ambition is priceless; it’s something deep in your veins.