What to take from the latest a16z report? Hear it From Arnaud Labossière 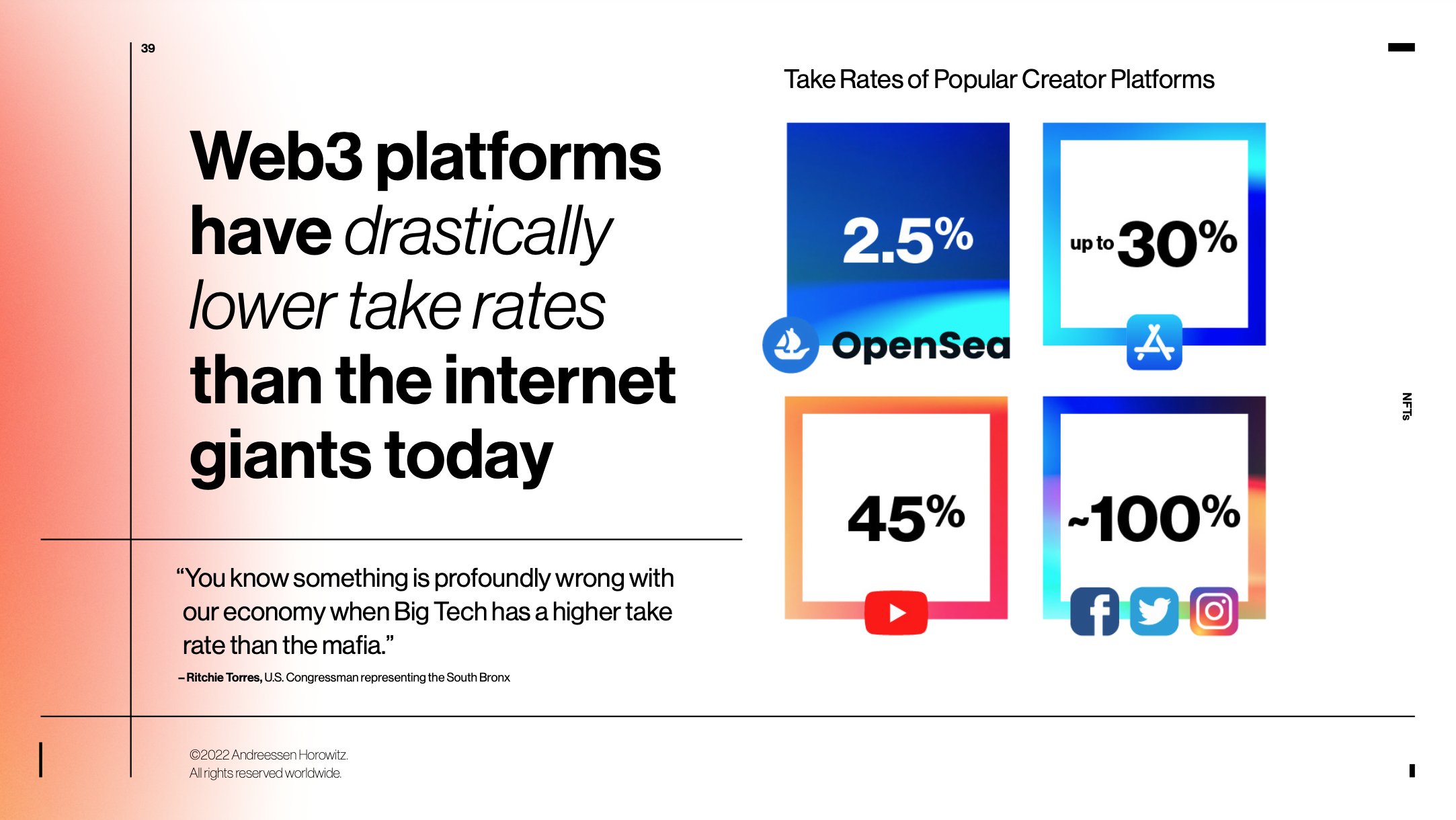 In 2021, non-fungible tokens were all the rage in the cryptocurrency world. It was even depicted in the media that crypto will someday replace fiat money because of its security features. According to Arnaud, there are a lot of activities that are taking place in the NFT domain that cannot be maintained for the long term. The majority of the initiatives that are now underway will, most probably, be canceled.

Despite the fact that NFTs might sometimes seem like silly squirrel pictures, there are a number of advantages to using them. Labossière believes that they permeate every sector of society and promise to make significant contributions to global trade. Creators will benefit more from Web 3 than from Web 2. Take a look at Web2 vs Web3 Take rates.

According to Arnaud’s interpretation of the “State of Crypto” report, despite the chaos that the cryptocurrency market is now in, it has the potential to transform the financial landscape. He believes that the study revealed a considerable rise in demand for DeFi technologies and decentralized financing. This occurs at a time when over 1.5 billion individuals worldwide lack access to bank accounts.

48 per cent of respondents in the study did not send or receive digital payments in the previous 12 months, according to the survey. It also claims that DeFi protocols have the potential to vastly expand access to financial services. According to total assets under management, DeFi would rank as the 31st largest U.S. bank, according to the analysis.

DeFi has a wide range of potential uses, although it is still in its early stages. The results showed that token exchanges and lending protocols are the most common use cases. As per Labossière, now that many crypto platforms are being used in the real world, financial inclusivity is being sparked. These Web3 platforms are not just for use in the financial industry. Some companies, like Sound, help musicians make money directly from their followers. Similar to how Helium uses Web3 to offer internet access at a quarter of the price it does now. These platforms demonstrate the numerous ways in which Web3 may transform society.

Furthermore, according to the analysis of the crypto venture fund report by Labossière, Ethereum is seeing unheard-of growth and demand despite the network’s hefty gas fees. The popularity of ETH, the research noted, is a double-edged sword. Ethereum dominates the market for a variety of reasons. Originally, smart contracts were first introduced by it.

Additionally, Ethereum was able to create a significant network influence. Despite having by far the most developers, Ethereum faces fierce competition from other platforms. Decentralization took precedence over scalability in Ethereum. As a result, other blockchains were able to pounce and lure customers in with lower prices and better functionality. He further mentions that the report’s conclusion speaks loudly about Web3’s impact on the modern world. Most significantly, the results show that Web3 offers more use cases than have been discovered so far, notwithstanding the current crisis.

Based on Labossière’s observations, cross-chain technology is gaining traction, proving that a single blockchain cannot meet all of our requirements. Given the many potential advantages of cross-chain technology, it is evident that the blockchain industry is about to enter a new era. Long has the debate raged over whether a unified blockchain for all use cases should be developed, or if many chains serving diverse purposes would be preferable.

When we first started thinking about blockchain technology back in 2009, we didn’t envision a future where different blockchains would work together to create one seamless system – we envisioned one blockchain. It’s only natural that the industry has been hesitant to abandon this vision when it’s led to such enormous success so far, but it’s important to remember that we’re at the dawn of a brand new era in blockchain technology and we need to keep an open mind about what the future holds in store for us.

Labossière claims that we’ve seen more bad Web3 games than good ones so far. As it takes a long time to build a good game. When there was a lot of money being pumped into the cryptocurrency space, teams were under pressure to put out products quickly.

Benjamin Graham once said, “It’s best to pay no attention to Mr. Market, who can often swing from being overly excited to very depressed.”

Arnaud suggests that if you believe in Web3, don’t step away. You could miss the opportunity of a lifetime. If people had given up on the internet because of the dotcom crash, they would have never seen life-changing advances such as Google translate.

Technology has evolved in just the past few years, and it’s done a lot for the world. We couldn’t live without streaming and cloud services or social media. When the dotcom crash happened, Amazon shares traded below 10 dollars. Even with the market down right now, that share would be worth over $2000 today. Web3 could be a very similar story. People will look back at this era as a bubble.

Labossière thinks Web3 can have a huge impact on the video game industry. They could revolutionize how we play games and share content online. Many game publishers have already embraced the new technology. There are also many promising new startups looking to break into the space. You could make a lot of money by investing in these companies now.

Web3 gaming platform, M1, allows gamers to purchase and own virtual items, such as weapons, in-game items, equipment etc. And exchange it for cryptocurrencies of top coins like Bitcoin (BTC), Ethereum (ETH), Monero (XMR) etc. – I.e. Crypto assets with real value. With the massive adoption of blockchain and cryptocurrencies across the globe, especially in the Asia region where many smaller countries are in the process of implementing Digital currencies in their economies, the future of gaming platforms in the Asia region looks very promising.

Labossière also notes that there are somewhere between 7 million and 50 million active Ethereum as per @a16z estimations, based on various on-chain metrics. We’re around where the internet was in 1995, in terms of adoption.

Andreessen Horowitz is known for making investments in both early-stage start-ups and established businesses and was founded in 2009 by financiers Marc Andreessen and Ben Horowitz. Their goal is to facilitate communication between various stakeholders in the technological ecosystem, such as startups, investors, executives, engineers, academics, and industry experts. They have cultivated a group of influential individuals in the fields of technology, business, media, and marketing, including many decision-makers, influencers, and important opinion leaders.

Arnaud Labossière supports major Web3 players in achieving their objectives in a continually altering competitive landscape. He mostly offers top-tier advice to the biggest businesses in the web3 industry. This group consists of well-known companies, corporate oligopolies, and top executives.